Around eight months ago I had this crazy idea – invite the people who’d helped me along on my social media journey to my house for dinner. I ran it past HimIndoors, he said yes and so the #epicdinnerparty was born.

The original list read like a social media Debrett’s – @MMaryMcKenna, @Liz_Azyan, @danslee, @baskers, @psfnick, @sarahlay and @lelil to name but a few. I devised a questionnaire using Zoomerang and that became the template for the evening. 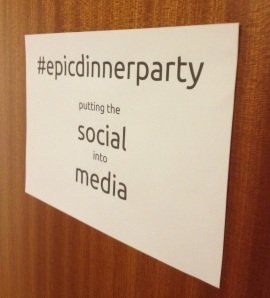 The guest list grew but then as we neared the date it became quite organic. People, understandably, had other family commitments but as they bowed out gracefully others took their place. Had everyone come, the house would have been bursting at the seams, not everyone would have had a seat at the dinner table and not everyone would have had a proper bed for the sleepover. As it was there were 14 of us round two dining tables and @DCCTayside and @DIPPUAngus Googled in just before the apres dinner vodka jelly shots.

I won’t go into much detail but I had a tremendous time. The #epicdinnerparty proved my point that those who love social media are sociable. I’d met everyone round the table, most had spoken to each other on Twitter even if they hadn’t met and some had never come across each other before. The group gelled, the conversation flowed and the laughter probably kept the neighbours up. The trampoline was bounced on by @Liz_Azyan, the pop-up gazebo was tested by @michaelJmclean, @prettysimple and @likeaword who ate outside and the fire pit had @LockhartL, @davidgrindlay and others’ eyes watering when yours truly threw on a damp log.

There was time for a game of Cards Against Humanity before we all headed for various beds. This game is not for the feint-hearted because it’s about as non-pc as it gets. Suffice to say the tears streamed down our faces and I know that my and Leah’s faces ached from laughing. @johnmitche11 won the game but we have decided to start a wiki so we can devise our own local government version – watch this space!

The next morning we ate a hearty breakfast where we discussed the next #epicdinnerparty, where we should have it and the logistics involved in getting a large number of people from all over the UK round a table to eat. We’re still teasing out the details but again, watch this space (assuming I’m invited).

A huge thank you to @Liz_Azyan, @prettysimple and @jonbolton for the photos and @handibode who made some fab tablet for the proceedings and should have been there but was nursing a poorly hubby.

Also a huge thank you to @davidgrindlay for giving people lifts and to @johnmitche11 for helping with the preparations.

But I have to say a massive thank you to all who attended – it was the wonderful company that made the night – I just can’t believe that most of you have now seen me in my jammies!

A few people asked for recipes so I though it best to share them here for everyone.

The original recipe is a Vietnamese beef salad from @realnigelslater’s The Kitchen Diaries but I’ve tweaked it a bit.

Mix the chilli, the squeezed lime juice, sugar, fish sauce and chilli sauce in a bowl. In a big bowl mix the salad ingredients and then mix through the dressing. Put the salad in glasses or china tea cups then balance the prawns over the side.
Serves 4 but is easily scaled up.
Sweet potato and coconut soup

It’s lost in the mists of time where this favourite recipe came from but i think it was Leiths recipe of the day from the Daily Mail of all places!

Heat the oil, add the curry paste and cook for a minute. Add the sweet potato and cook for 3 minutes. Add the stock and coconut milk, bring to gentle simmer and cook for 20 minutes. Allow to cool slightly then whizz until smooth with the salt, pepper and lime juice then reheat to serve.

The original recipe, from Bowl Food, is for lamb but I knew some of the party wouldn’t eat lamb and so opted for chicken. The recipe asks for carrot but I’ve used dried apricots too.

Mix the spices, garlic, 2 tbsp of the oil and salt in a large bowl. Add the chicken and mix to coat. Cover and leave to marinate in the fridge for at least 2 hours, preferably overnight. Heat the remaining oil in a large pan then batch brown the chicken. Return the meat to the pan, add the onion and cook for 2 mins. Add the stock, tomatoes, carrot and coriander, bring to the boil then lower the heat, cover and simmer for 30 mins if using chicken, 1 hour if lamb. Remove the lid then simmer uncovered for 15 minutes if using chicken, 30 if using lamb. Serve with cous cous and drizzle over honey. Serves 4 but is easily scaled up.

This is an @rivercottage recipe from River Cottage Veg. MiniMe loves this so much that when I make it she refills her bowl twice which can only be a good thing with a picky pre-teen.

Heat the oil and cook the onions until starting to turn golden. Turn heat down and add garlic, celery, pepper, turmeric, cinnamon, and ginger and cook for a couple of minutes. Add lentils, chickpeas, passata, parsley and half the coriander. Cook over a low heat for 15 mins. Peel, de-seed and cut the squash into chunks and add to the pan with the bay leaf. Cover and simmer for 30 mins. Season and serve with the leftover coriander leaves. Serves 6 but is easily scaled up.

This is another favourite from @realnigelslater’s Kitchen Diaries and if you need to get over your fear of making pastry from scratch this is the one that makes it easy peasy.

Pastry: Put flour, icing sugar and butter into a food processor and blitz for a few seconds. Stop when mixture looks like fine breadcrumbs. Mix in egg yolks and water. Tip into a bowl and bring dough together into a thick log with your hands. Wrap in greaseproof paper and refrigerate for 30 mins. Cut  thin slices from the pastry log, then press each one firmly into a loose-bottomed 23-24cm tart tin, pressing the discs together and up the sides of the tin, making sure there are no holes or you’ll lose all the filling. Prick lightly with a fork then refrigerate for 30 mins. Heat oven to 200C/ gas 6. Place a sheet of greaseproof paper in the tart case and fill it with baking beans (I use dried chickpeas) and bake for 10 mins. Remove paper and bake for 5 mins or until pastry is dry to the touch. Turn oven down to 150C/gas 2. Finely grate zest from 2 limes. Squeeze enough limes to produce 180ml juice. Mix eggs and sugar, beating lightly then stir in line juice and cream. Stir in the zest then pour mixture into tart tin and bake for 45-50 mins. Remove whilst still wobbly and leave to cool. I like serving it warm with @EquisIceCream, either their award-winning vanilla or chocolate.

These are damn tasty but lethal. Some downed them in one, some ate them with a spoon. Me, I used a medicine spoon cos they tasted kind of medicinal.

Melt the jelly in boiling water, as per pack instructions. Instead of topping up with water, top up with vodka. Once set, spoon jelly into a blender and top up about half again with orange juice. Whizz till mixed, spoon into shot glasses and refrigerate. Makes 20.

This is my trusty @nigella_lawson recipe that is perfect for feeding large numbers as you can just keep the pancakes coming. No matter how many you make there never seem to be any left over.

In a wide-necked jug mix the flour, baking powder, sugar and salt. In another jug mix the milk and eggs then beat into the flour mixture, alternating with the melted butter. Beat the batter thoroughly to get rid of lumps. As the bacon grills, heat a non-stick frying pan ill medium hot. I can fit four pancakes in my pan so I put four spoonfuls of the batter in at a time. Wait till the batter bubbles then flip. Keep warm till you have enough bacon and pancakes to get them going. Serve with butter and maple syrup.

I made this the day before then reheated it with a covering of foil to stop the top burning and I served it with veggie sausages.

Heat the oven to 200C/gas 6. Oil the base of a ceramic/glass oven dish. Beat the eggs in a bowl then mix in the spinach, mushrooms, spring onions, basil and seasoning. Tip into the dish, crumble over the cheese and bake for 20 minutes or until the eggs are cooked.