I knew today was going to go at break-neck speed before I went to bed last night.

I was up early (for a Saturday) to go to the local grain store for cat food, then the chemist to pick up a prescription, then the Pet Crematorium to pick up Coco’s ashes. It was heartbreaking seeing the tiny little box but again the staff were lovely and when I left I phoned the vet to compliment Paul who looked after us so well last Tuesday. Apparently he’s a locum and the practice have realised how good he is and are desperate to keep hold of him, but it looks like he may be going soon 😦 Now I have to think of somewhere to scatter Sugar and Coco together. Ideally I’d love to dig them into the carrot patch but I don’t know what effect that would have on the carrots. Let me know if you have any ideas. 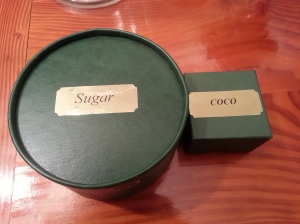 After that it was a mad dash to get MiniMe to her next birthday party. They were off paintballing and I’m wondering how she got on. There haven’t been any phone calls from the hospital so I’m guessing she’s OK.

From there it was off to MiniHim’s swimming lesson. He was moving up a group today and slightly further away from the shallow end. We had tears in the back of the car and it turns out he was terrified of not being able to touch the bottom. I suggested that we get him changed and have a word with his new teacher before he got in the pool. When we were waiting poolside he spotted his new teacher heading a football about eight times before it fell in the water. This impressed him so much that he headed for the pool and didn’t look back. He flourished in this new lesson, doing breadths of back stroke, front crawl and breast stroke. I think he may be a better swimmer than me now!

After that it was lunch at HimIndoor’s mum’s then off to a softplay centre to meet up with MiniHim’s best friend from nursery. Just as the two hours were up I got a Facebook reminder on my phone to say that I was supposed to be at a focus group for Airley Fairley Cakes in an hour. This is my friend’s cake business, the friend who is also a Partylite rep. She wanted to ply us with drink, show us some candles and road test some new cake flavours for her.

Who could refuse that? Certainly not me but that meant no time for dinner so we had to make do with a trip to McDonald’s, much to MiniHim’s delight.

So then I headed for the cake testing, bottle of wine in hand. I tried coffee cake, banana cupcakes with maple frosting and mint and chocolate cupcakes.

The coffee cake was lovely but I suggested an espresso version for caffeine addicts like me. I liked the banana cake and the maple frosting but not necessarily together – I think the banana cake needs a plain frosting and the maple frosting needs a plain cake. The mint and chocolate was just perfect though and I think I’ll back placing an order for my mum’s birthday cake soon so I’m open to suggestions Mrs Airley Fairley.

Three glasses of wine later I reckoned it was time to get home if I was going to write this post.

Unfortunately the lack of time for dinner means that I have no recipe but I’m going to make what I had planned for tomorrow’s lunch so I’ll stick in the heading and come back to it once I have a photo.

I’ve done my shop at the butchers and the supermarket and here’s what I have planned for the week – gingerbread, sausages on a bed of tomatoey lentils, meatball bake, butternut squash soup, chicken pie and chilli quesadillas.

This is a great way of using up boiled, fried or roast potatoes and cooked ham but this time around I started the potatoes from scratch. All the quantities are approximate so feel free to use more or less depending on what you like. There is nothing quite like the smell of frying onions, even more so if they smell like fairground onions but you know that what you’re about to eat will taste infinitely better than a fairground burger!

a handful of mushrooms sliced,

couple of sprigs of thyme leaves

Method: Boil the potatoes for 10 minutes then drain well. Heat the oil in a frying pan which has a lid – you’ll use the lid later on but an up-turned dinner plate will work too. Add the potatoes and move around in the oil. Add the coriander and paprika and mix up the pan. Leave to brown for a few minutes then add the onion and mushrooms. When the mushrooms are starting to give back their moisture back to the pan add the cabbage, vinegar, wine and sugar then cover and cook on a low heat for about 20 minutes.

Remove the lid, add the remaining ingredients and heat through.