So where was I? Ah, parents’ night.

MiniMe reckoned her maths teacher would tell us she needed psychiatric help mostly because she says random things in his class in a voice louder than she meant to use. When we saw him he said she was settling in well and just needed a bit more confidence in her ability. He asked if she had said anything about his classes so we told him. He just laughed and said he found her humour a bit out there but that it was just her expressing herself and that it wasn’t doing any harm. I breathed a sigh of relief. This is exactly the opposite of what would have been done when I was at school. My generation would have been broken by skelps on the back of the hand with a ruler, lines, detention and possibly even the belt but this teacher’s attitude could have been straight out of the Alfie Kohn book on parenting I’ve just finished reading. I’ll write about that tomorrow and believe me, it’s a life-changer.

Strange thing is that MiniHim is on a star chart at primary school for similar behaviour which goes against what Kohn believes but again, more of that tomorrow.

Next up was tech and I have to admit I’ve already mistaken this purple-haired teacher for a pupil and when we spoke to her I could see why MiniMe likes her so much – she is pretty awesome. Apparently MiniMe’s tech drawing is fab but her practical skills leave a lot to be desired – too slap-dash with inaccurate measuring. Sounds familiar. I got exactly the same report for tech and sewing – my pattern cutting meant none of my seams worked.

The best report was from her English teacher. A flair for creating characters, accurate spelling a standard of writing well above that of a first year and she was very animated when they tackled some drama in class. I asked if there was a drama group at the school as MiniMe has always fancied going to classes. Seemingly there isn’t but the teacher is going to look into starting one as she wants to encourage MiniMe as much as possible. Proud!

We also went to see her modern studies teacher and again she got a glowing report. I’ll be lending the class a ballot box and papers as well as a polling booth for the upcoming class elections but the real highlight of this visit was discovering that the teacher’s nickname is Mr Incredible. He really does look like him – imagine having Mr Incredible teaching modern studies! 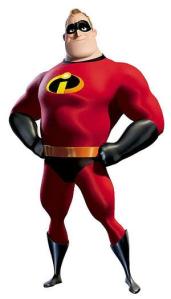 I want to go back to school. When I said that he reckoned I should go back as a teacher – now there’s a thought. 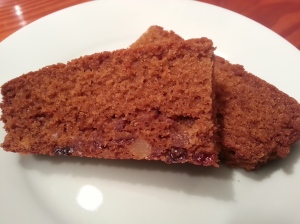 a good glug of the syrup from the ginger jar

a handful of sultanas

Method: Line a square cake tin (around 20cms) with baking paper and heat the oven to 190C/Gas 5.

Sift the flour, ground ginger, cinnamon, bicarb and salt together in a bowl.

Put the golden syrup, ginger syrup and butter in a small saucepan and heat gently, adding the chopped ginger, sultanas and sugar. Let it bubble for a minute, stirring occasionally to stop it sticking.

Break the eggs into a bowl and beat together with the milk. Add the contents of the pan to the flour and spices, stirring till it’s smooth. Mix in the egg mixture.

Put the whole lot into the tin and bake for about 50 minutes, testing with a skewer, which should come out clean.

You can serve it warm or leave in the tin until cool then remove for easy handling.