Today started off with a clean diary and no meetings. I thought I’d get my teeth into some of the big jobs that have been hanging around my desk for a while.

Nope! Suddenly remembered that our new Head of Comms is coming in for a visit and my desk looked like a bombsite. I spent most of the morning cleaning that up. There was some recycling, some shredding and some binning and now I have a ‘to do’ pile and a ‘to read’ pile. I’ll have to do the same with my virtual desktop next and maybe my laptop won’t grind to a halt at 10.30 every morning.

The afternoon had a quick flurry of activity with two meetings thrown in at the last-minute then it was straight off to MiniHim’s school for the first parent council meeting of the year. These meetings are great. We have a really good team and a fabulous head teacher. Before Christmas I did a Prezi about making our kids safe online which went down really well and now we’re planning a ‘Bring your tech to school’ day. We’ll have a range of gaming devices, tablets, phones and various websites set up, such as Facebook and Muzy and go through the various security settings to give parents an idea of what they should be looking out for. We’re encouraging big brothers and sisters along too as they’ll probably have more knowledge than us oldies. As an aside at this part of the meeting the heedie revealed that they’ve just bought 16 iPads and are planning on another 16 so they have a enough for a full class to use at a time. They’ll be hooked up to an MacBook where all the apps will be loaded. They intend integrating them into all lessons instead of having a separate IT suite where the kids have to decamp to if they want to use any tech for research. This was music to my ears and the more integration into regular classes the better. We have to get our kids interested, not just in what the apps can do, but how they’re built and the fact that all kinds of creatives are needed, not just coders and developers.

Also on the agenda was the new school build which will be starting on 2014 as part of our schools modernisation programme. There’s already been a wish list submitted and most things on it have been agreed before the plans have even been drawn up. Tonight we were talking community gardens, outside classrooms, covered areas so the kids can still go out to play in the rain and of course, every school’s nightmare, the car park.

I’m just home and have had no dinner so it’s toast for me tonight. Luckily I have an extra recipe tucked up my sleeve. 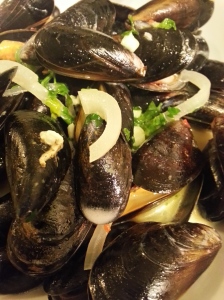 Method: First clean the mussels. To remove the beards simply yank them along the direction of the shell opening. If the mussel doesn’t close up, discard it as it’s off. Also discard any with broken shells. Run them under a cold tap in a colander.

Melt the butter in a huge pan and cook the onion and garlic till soft. Pour in the wine, bring to the boil and add the mussels.

Cover and cook over a high heat for 4-5 minutes until the shells have opened.

Transfer the mussels to a serving dish discarding any that are still closed.

Add the stock to the juices, bring to the boil then reduce the heat and add the cream, parsley and seasoning. Pour over the mussels and serve with crusty bread.