Today, while MiniHim was at his swimming lesson, MiniMe and I went to visit a friend of mine. MiniMe has a history assignment due in a couple of weeks where she has to write three letters imagining she’s WW2 evacuee writing home, one as she arrives in the countryside, one a month in and one a week before she’s due to go home.

I knew my friend Jacqueline had been evacuated from London to Wales but I’d never heard her story so was really pleased she agreed to let MiniMe interview her for background material.

Her sister and brother were first to leave London, headed by train for Northampton. There was no matching up with families before they left – neither parents nor children knew who they’d end up with. When they arrived they were taken to a school and the villagers came and picked who they wanted. Jacqueline’s mum had told her sister, who was six, that under no circumstances was she to be separated from her brother who was four. The advice stuck in her head and when Mrs Webster stepped forward to take her she said she’d have to take her brother too. Luckily she did.

Jacqueline was only 14 months old when she was evacuated but because of a recent operation her mum was allowed to go with her. When they got to Pembrokeshire they were put on a bus which went round all the farms dropping children off. When they got to The Willows the farmer said he could only take one and Jacqueline’s mum jumped at the chance.

Evacuees in Montgomeryshire, Wales. Taken by Geoff Charles on September 9, 1939. Courtesy of the National Library of Wales via Flickr

All of them were lucky. The Websters looked after her brother and sister like their own as did Peggy and Auntie look after Jacqueline when her mum had to go back to London. In fact Jacqueline went back to visit her second family every year until 2009. She never felt like a Londoner as she’d spent five happy years of freedom in the Welsh countryside with enough to eat, fields to play in and the beach close by. When she got back to London she had to make new friends and get to know her brother, sister and dad whom she’d never known.

Jacqueline realises that she and her siblings had it easy compared to a lot of evacuees. As she explained some had never seen a cow before and hated the country, some were worked really hard and not fed enough but at the same time some turned up full of fleas and lice, constantly wet the bed and gave their surrogate parents a hard time.

The material MiniMe has for her assignment is invaluable – Jacqueline even lent us some of the letters her foster mum wrote home to her mum in London. MiniMe’s all fired up with ideas and desperate to get started – now how can we do the same for maths homework 😉

After the interviews and lunch MiniMe headed for a party and the rest of us went to see Wreck-it Ralph at the cinema. Even although I was never an arcade kid and hadn’t played any of the games the film took its inspiration from, I still got most of the references and I have to say it’s all really well done. I’m betting all the little girls in the cinema want to be Vanellope, voiced by Sarah Silverman but if their mothers have any sense, like me, they’ll spend the film wanting to kick ass like Sergeant Calhoun voiced by Jane Lynch. 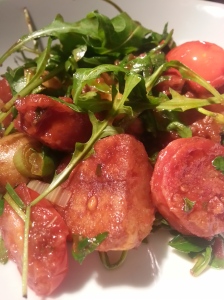 a couple of handfuls of new potatoes, cut into quarters

a couple of handfuls of cherry tomatoes, halved

a good splash or two of balsamic vinegar

Method: Boil the potatoes for 10 minutes and drain well. Heat the oil and tip in the  potatoes and Chorizo – the oil and potatoes will go slightly orange as the Chorizo cooks.

Once the Chorizo and potatoes start to crisp tip on the spring onions, tomatoes and parsley and cook for a minute. Add the balsamic and once bubbling tip the whole lot into a serving bowl and toss with the rocket and black pepper.