Today I caught up with two friends I haven’t seen in ages and our meeting really made me realise how much I find out about people via social media.
Lolly and I met when we joined Glasgow Roller Derby as newbies and graduated into rookies at the same time. Then I stopped going because I was studying and she stopped because she broke her ankle. Even though we haven’t spoken to each other in ages I knew she’d bought a wee house in the outskirts of Glasgow, that she has a mild addiction to Black Milk leggings and that she had a clear-out of her extensive wardrobe to help finance the fitting out of her new house.

My other friend Simone started Glasgow Roller Derby as a newbie when I was a rookie and I used to help out at their Sunday morning sessions. Again, I hadn’t seen her in over a year but I knew she was nearing the end of a photography course, I had watched her two little girls grow up through the portraits she takes and that she visited her mum in Australia after Christmas.

One of the reasons we were meeting was to exchange goods – I was buying some clothes from Lolly and Simone’s kids were getting some of MiniHim’s cast-off Toy Story toys. All of this, including the buying, selling and recycling was done on Facebook.

Anyway we met up in Cup and it started out innocent enough with some sumptuous cupcakes and Belgian hot chocolate.

But what’s a girl supposed to do when she’s sitting on a bar stool at the bar and there are Bellinis being made in front of her?

So it was cocktails all round – a Bellini for me, a strawberry shortcake for Lolly, a Nojito (non-alcoholic) for Simone because she was driving and non-alcoholic Strawberry Crushes for the kids.

We had a great time and the Cup Tea Lounge is a wonderful place with lovely details – as you can see I was sitting directly below a fabulous chandelier. I think I shall spend more Sunday afternoons eating cupcakes and drinking cocktails. 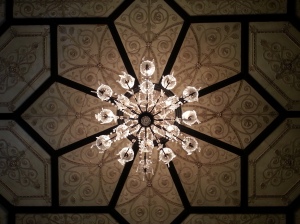 After a bit of shopping MiniMe headed for the train but stopped off in the American Candy Store for some very expensive goodies. Nom! 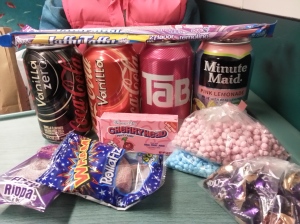 MiniHim was disappointed though as he gave me strict instructions not to come back without a catapult. Gone are the days of making one with a tree branch and elastic – he wanted his ready made. Hamleys didn’t have any and with the lack of toy shops these days I came back empty-handed. A quick Google search however, shows that had I tried a fishing shop I’d have got one no bother. Mind you, at £3.79 including p&p it’s probably cheaper than anything I could have bought in Hamleys.

Pork fillet is the only meat I will buy in the supermarket, now that I’ve found the best butcher in Lanarkshire. Apparently this cut produces a lot of waste so he doesn’t do it but sometimes there’s no other cut will do for a recipe. This is one of them.

a grinding of black pepper

Rub two thirds of the sauce over the pork fillet, cover with cling film and marinade in the fridge for at least 2 hours, preferably overnight.

Take the meat out the fridge and allow to come to room temperature. Heat the oven to 200C/Gas 6. Roast the pork for 35-40 minutes, basting it in its juices and the leftover sauce every now and again. Remove from the oven and leave to rest wrapped loosely in tinfoil.

Slice thinly and serve with the juices, Perfect Every Time Rice (boil it with 4-6 star anise) and mushrooms in oyster sauce.