While MiniHim was at his swimming lesson this morning I finished the book I was reading, French Children Don’t Throw Food. I bought it for £3.99 in Sainsbury’s a couple of weeks ago while doing the family shop. It looked like pulp fiction but I bought it to get me into the mood for the trip to France thinking it would be some thow-away story about an American living in Paris with all the cliches of the day. 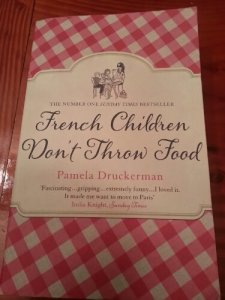 I was pleasantly surprised to discover pretty early on that it’s written by an American journalist – Pamela Druckerman – who was living in Paris with her English husband when they found themselves pregnant. She spends the next 5 years comparing American parenting with French with a lot of research thrown in from French psychologists, doctors and educationists.

Not only did it all make perfect sense, it made me want to turn back time and move to Paris en famille with the kids young enough to benefit from the French way. I’m not just talking about the philosophy and the parenting practice but the fact that state creches and nurseries are heavily subsidised and accessible by all. The people who work there are all working to the same French system as the parents. the kids have four courses of adult food each day,  pureed for the younger ones and the everyone knows where they are.

I would advise anyone expecting a baby to buy a copy of this book and to use it as a bible for your sanity and your children’s. Even if you already have children its worth a read because there are things in it that it’ll never be too late to introduce. I’ve even picked up on a few tips for our trip. As well as ‘please’ and ‘thank you’ French adults expect children of all ages to say ‘hello’ and ‘goodbye’, with confidence, to adults and for their parents to at least point out that they should be saying them. If none of this is done the children are considered ill-bred. Mine have been practising since page 188.

So, like Pamela I am now asking myself several times a day. ‘What would a French mother do?’ I haven’t resorted to Gauloises yet but I may try Sancerre soon 😉

In brief, over the last 2 weeks I have learned:

Method: Heat the oven to 200C/Gas 6. Trim the fat off the bacon and lay two slices side by side, fitting the pieces together as best as possible. Lie the salmon on top and rub on some oil. Grind some pepper on top and lie the tarragon on top lengthways. Fold the bacon over and place on a baking tray. Repeat with the other salmon steak and bake in the oven for 20 minutes.